From G. Le Blanc Smith's article in The Reliquary for 1905.

'Dicky,' is a skull, or rather the remains of one, and his domicile is Tunstead Farm between Chapel-en-le-Frith and Whaley Bridge. Who 'Dicky' belonged to when, literally, in the flesh, is a debated question. One story has it that, at one time, the farm was in possession of two sisters, coheiresses. One of these, being foully done to death, besought, even declared, in her dying moments that her skull should for ever remain in the house.

Another story is, that this skull is that of a gallant soldier, Ned Dickson, who went to the wars, and, on his return unscathed, found his relatives had quietly taken possession of his house and effects; on very naturally wanting to know the reason of the invasion, he was promptly murdered by them and buried under the floor.

Both these tales have weak points; the first makes the skull a woman's; then why 'Dicky'? The second makes it that of a man, but it is, without a shadow of a doubt, the skull of a female. However, this last story has the weight of local belief behind it. 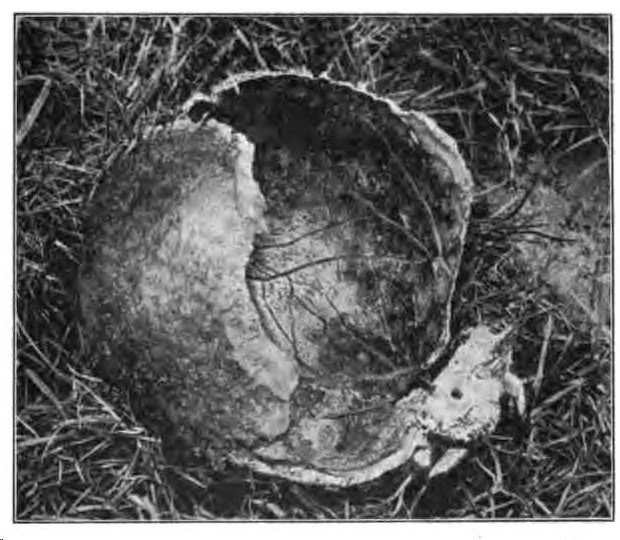 The first story was, no doubt, the direct outcome of the news that the skull was a woman's, and that the farm has for generations belonged to the family of Dixon (i.e., 'Dicky'). Mr. Edward Dixon is the present occupier of the farm and owner of the redoubtable, but somewhat tricky and treacherous, 'Dicky,' who is now in his (or her) 300th year, or thereabouts.

'Dicky' is an univiting looking object, consisting of three fragments, two parietal and one clavical. In colour he is a fine rich shade of olive green, shaded at the edges with brown with white spots; he looks so very innocent that all the tales they tell of him seem as though they must be gross libels.

'Dicky' was kindly lent to me for purposes of portraiture in the garden of his domicile, and is shown in fig. 1. His home is in a cold-looking old-fashioned farmhouse situated on the slopes of Combs Edge, and is shown in fig. 2, the window in which he must be kept (not only is kept), being that under the white X.

The present generation profess not to believe in him or his works, but there is an undercurrent of superstitious doubt which caused Mr. Dixon to tell me, on my request for permission to photograph him, that he must ask the 'missus' first. The result was entirely satisfactory to me, though I was momentarily expecting some show of violent antipathy (on 'Dicky's' part) to facing the camera. Whether the present owners believe in him or not, it is a fact that only a year or two ago the loan of 'Dicky' was requested for a side show and additional attraction to a bazaar then being held in the Church schools at Chapel-en-le-Frith. His owners knowing, however, his mischievous reputation, consented only on the strict understanding that he was safely returned to his accustomed window corner before sunset. At this point negotiations were broken off, both sides feeling, probably, that they were best off as they were, so 'Dicky' did not enjoy the unaccustomed gaiety of a church bazaar!

Two of 'Dicky's' special qualifications, other than that for mischief, are his immunity to decay, and the fact that no dust ever accumulates on him.

[...] The prevailing idea has always been that provided 'Dicky' was propitiated, by being left in undisturbed possession of his window ledge, all would be well with the inhabitants of the house and denizens of the farmyard. He is then safe from doing damage, and, in fact, will make himself very useful.

[...] Among 'Dicky's' pleasing traits are his habits of calling servants or other early risers, saddling the horses prior to a journey, giving notice of cows about to calve, and of cattle who were in danger on stormy nights. In fact, 'Dicky' pleased is an angel, while with his wrath aroused he is just the opposite. 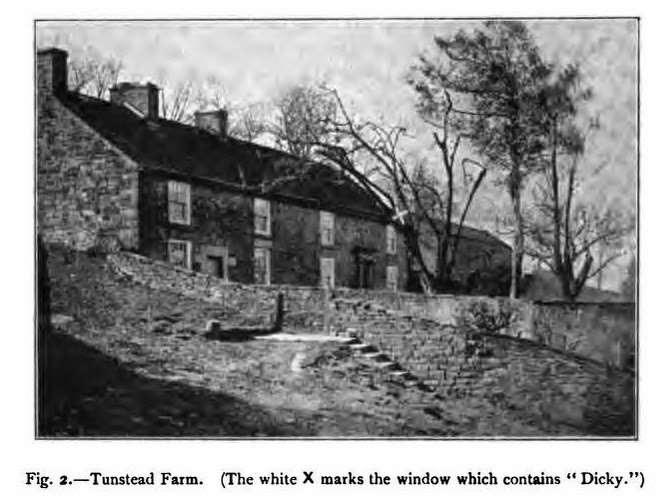 Not many years ago he took a violent dislike to the railway, which was so arranged that, when complete, it would pass close to the house. At one place the engineers had decided to carry the track over the road. 'Dicky,' however, decided that they shouldn't, so as fast as they erected the arch, 'Dicky' sent the whole thing tumbling down again - he was annoyed. Finally the line was diverted, but that did not altogether appease 'Dicky,' for a series of landslips and subsidences occurred for some time after.

Once, only once, 'Dicky' was forcibly ejected from his home, during the rebuilding of the house. Before long a spectre appeared, to the consternation of the workmen, and morning after morning the work of the day before was damaged; all day long, as they worked, no matter how noisily, a moaning was distinctly heard. 'Dicky' was therefore sought for and replaced, after which the work of rebuilding progressed apace.

[...] Hutchinson, in his Tour of the Peak, written in 1807, says:--
[...] a Mr. Adam Fox, who was brought up in the house, has not only repeatedly heard singular noises, and observed very singular circumstances, but can produce fifty persons within the parish who have seen an apparition at this place. He has often found the doors opening to his hand, the servants have been repeatedly called up of a morning, many good offices have been done by the apparition at different times, and, in fact, it is looked upon more as a guardian spirit than a terror to the family, never disturbing them but in case of an approaching death of a relation or neighbour, and showing its resentment only when spoken of with disrespect, or when its own awful memorial of mortality is removed. Twice within the memory of man the skull has been taken from the premises - once on building the present house on the site of the old one, and another time when it was buried in Chapel churchyard - but there was no peace! no rest! It must be replaced.

[...] I have talked about 'Dicky' to a great many people who have heard of him, and in some cases known him for years; they all say just the same when asked their opinion; they say 'I don't believe in him, and yet - there must be something." This, I think, fairly represents local feeling towards him. There is no absolute dread of him, but there is an undercurrent of superstition which makes people regard him as more than ordinary, less than dangerous, and, on the whole, too curious and mysterious to be passed by with contempt. [...]